Doctor Faustus has been for a while my favourite play, and I’d consider this show to be my best lighting. Alice Penrose’s set did wonders for the overall aesthetic – profiles in open white with a breakup gobo lit her bookshelves beautifully and set the perfect tone for a busy study. The entire play focussed around the passage of time, and this was represented by a handmade DMX-operable clock that loomed over the stage. A profile containing an Iris which lit this clock was on for practically the entire show, and transitions centred around the clock with its hands whizzing round as cast members changed the set below it.

I lit the late-night study scenes with primarily low sidelight, creating a beautiful shadowy profile of the actors, as well as giving an impression of dark night-time illumination. Chauvet Ovations as pipe ends provided most of the visibility light for the show and were used in a hazy orange for the study scenes. This was complemented by profiles in open white as shins, providing brilliant depth and texture on the actors, a gobo wash backlight in L156, and fresnels at chest height on booms in L156 which gave an incredible candlelight look which complimented the fusty study aesthetic brilliantly. The overall lighting design principal was to break this sepia tone study with harsher, colder light as Mephistopheles infiltrated Faustus’ world. The study, through colour shifts in the pipe ends and backlight, got gradually cooler and harsher, until in the second act, the duo’s travels across Europe were lit in a contrastingly cool palette for the Pope’s private quarters. The climax of this was Lucifer lit by two Source Four Pars in L202 providing 45-degree diagonal backlight. The image was shockingly dramatic, and combined with a thunderous sound effect on his first entrance, a snap to full combined with a strobe flicker was incredibly impactful.

To this extent, the lighting was mainly naturalistic, but the presence of any summoned demons was combined with a change into more abstract lighting. For the seven deadly sins, the illumination was provided by the shins, drawing focus to the choreographed movement, and casting suitably eery shadows. Each of the sins was then lit in their own respective colour, evocative of their specific sin – orange/brown for gluttony, green for envy, red for wroth, pink for lechery, etc. The make-up department reflected these same colours in the facial make up of the individual demons, in what was an incredibly nice and subtle touch. The sins as a group were backlit by shades of dark blue, purple, and green, aiming to reflect the colour of bruises – the resulting aesthetic was one of discomfort and an unsettling tone. The introduction of abstract colour continued into the more beautiful demons – a lavish gold for the summoning of Alexander and his paramour, and a deep blue to coincide with the costume of Helen of Troy. As Mephistopheles symbolically stood between Helen and Faustus, to block him from following her, this abstract colour quickly faded away, as the insubstantiality of the demon Helen too faded back into hell. Along a similar vein was the presentation of the good and evil angels on stage. The good angel, stood in the centre of the balcony, was always backlit by a bright fresnel in L101, giving a beautiful halo effect, whilst the evil angel was represented by a swarming group of demons crawling underneath the scaffolding balcony, and so were lit by two Source Four Pars on floor stands, one coloured orange, one flame red, flickering irregularly to give a sense of the demons emerging from fire, whilst the angle cast large, menacing shadows across the actors and back wall.

Aside from this, two crucial moments of the show deserve comment – the summoning of Mephistopheles, and the dragging of Faustus to hell. As Faustus steps into his summoning circle, a rapid step effect on the backlight in a cold white, timed with an astoundingly loud thunder crack from Andrew Orr, provided a magnificently ominous and striking lighting crack. A toplight fresnel in L201 then isolated Faustus in his summoning circle, whilst two VK740z moving head wash lights provided a tight facelight on Faustus. On the moment of summoning, a rapid effect on the boom fresnels complimented the shock of a pyrotechnic line rocket to the upstage right corner. A fresnel on a floorstand on the balcony, placed to light a cast member hidden behind a flat, cast a menacing shadow across the backwall to represent Mephistopheles – Faustus demands that this figure is ‘too ugly to attend on me’. The real Mephistopheles then simply enters stage left and is picked out by a VK740z in a cold colour. For the final scene in which Faustus is dragged to hell, as the DMX clock strikes midnight, the abstract colour used to cover the demons climaxed, bursting out into bright reds and oranges across the stage, almost all in flicker effects, and alongside pyro-flashes, as hell opened up. This faded away as Faustus was dragged off, leaving only simple light on the study, and light on Mephistopheles and Faustus on the balcony. With each remaining sound effect clock chime, a pyro-flash, courtesy of Harvey Dovell, and a light removed. The scene was gradually stripped away, the light gone from the balcony, then the gobo wash, then the remaining fresnel lighting the desk, then the gobo profiles lighting the set, until for the final chime only the clock remained. The light on the clock faded to black as the final chime faded away, completing what was a truly striking image and experience for the audience.

'The lighting was particularly effective at multiple points, from making subtle changes that shifted with Faustus’ mood to the grander flashing red lights that accompanied the deadly sins'

'When we add in subtle lighting effects from Will Hayman, delicately picking out individual bookcases and the clock above, and music by Andrew Orr […] we have quality visual and aural backing'

'From Alice Penrose’s set […] to Will Hayman’s lighting design, the visual elements of the production were absolutely excellent. […] The wonderful grotesqueness of the sins was magnified by lights shifting in colour and an undercurrent of ominous sound that permeated the auditorium' 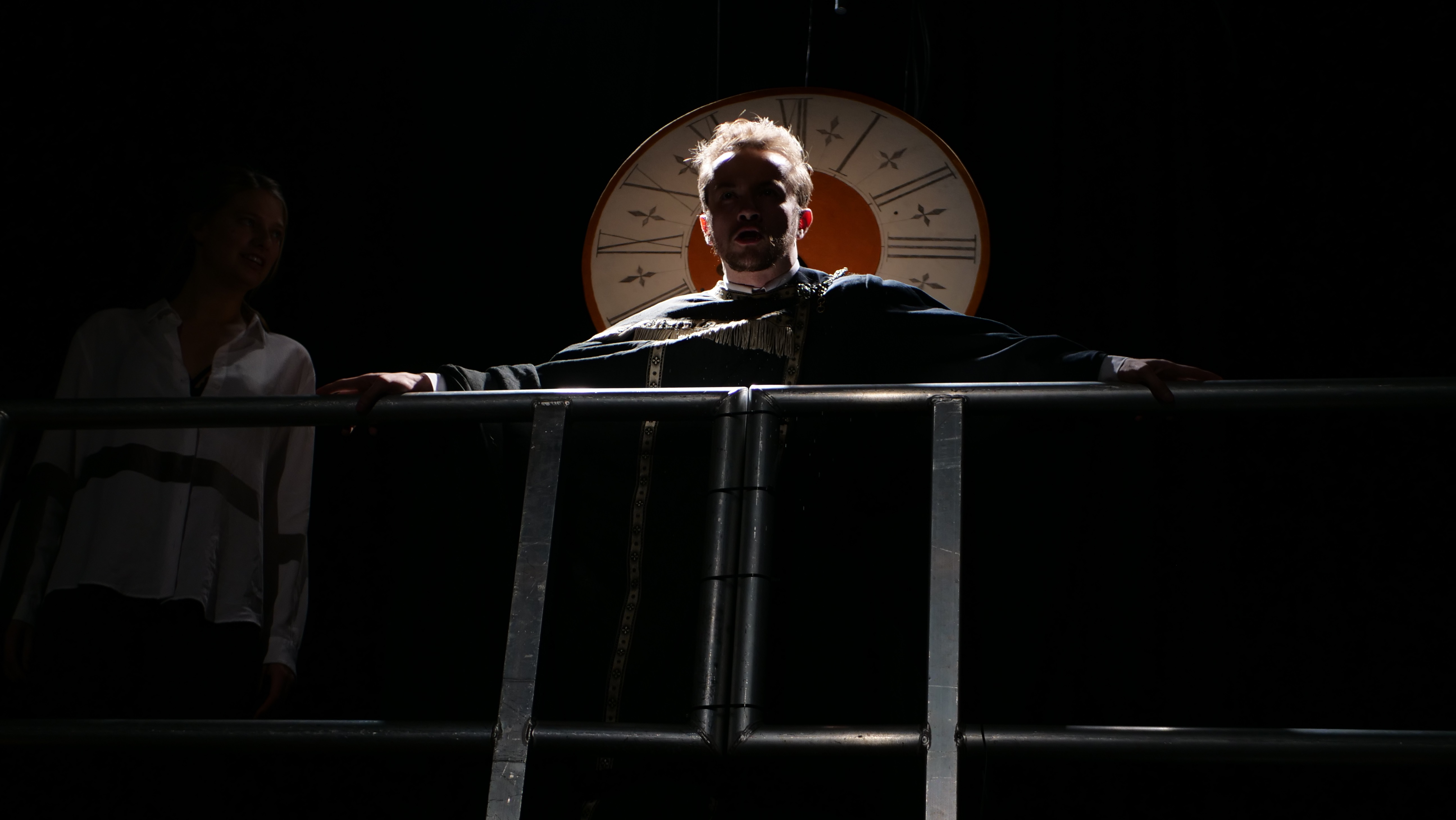