MERRILY WE ROLL ALONG The central premise of Merrily We Roll Along is that it progresses backwards through time, and so a lot of the lighting design was focussed around giving each scene a sense of time and location in any individual moment. The show opens at a pool party, which was lit in a suitably warm tone, and a vibrant light blue cyclorama with almost cartoon-esque cloud gobos along the top providing a sense of lavish conviviality. This contrasted directly with the end of the play, set on a rooftop. Low side light in cold tones along with a dim blue backlight gave a sense of night-time stargazing. The state was more simple, with the golden exuberance of the opening scene now gone, as the characters are young graduates yet to begin their careers, but nonetheless calming, beautiful and joyful in its own right – filled with hope. Other notable moments of setting specific lighting states included a TV studio, lit with sharply bladed profiles, confining the studio to the left side of the stage, and a light box “ON AIR” sign to distinguish between the characters’ off stage dialogue and the interview itself, and a low, cold light placing two characters in an outside greenhouse at night, whilst a bright green breakup gobo picked up the trellis behind them, making the leaves pop and emphasising the symbolism of the set.

The rig was almost entirely LED, with the exception of some specials used to pick out set and flown pieces. Custom practicals were used a lot throughout the show too, including this “ON AIR” sign, but primarily light boxes inside the staircase set upstage, which transformed the staircase into a rooftop skyline for the final scene, and a flown vanity mirror which characters acted through, as if speaking into the mirror, which then became a play poster in the second act. A lot of the design was problem solving; a lot of flown pieces meant we had borders very close to LX bars, and as a result many of my moving heads couldn’t pick out actors on the upstage staircase. A last minute 6m SR boom just about gave enough visibility on actors on the staircase without spilling too much onto the cyc behind it – although this still wasn’t ideal. The show too was incredibly busy, and the technical rehearsal incredibly short, meaning edits to the lighting design were being made right up until the final performance. “Now You Know” at the end of the first act started as a series of slow fades through gradually more hopeful colours – we ran out of time in the tech, meaning my focus had to be on getting faces lit. It wasn’t until two days later that I’d been able to add garish gobo highlights on the caricature-like choreography, and rapid movement and step effects to properly reflect the high paced song, and the mayhem on stage caused by the choreographed chaos.

Aside from this, a large focus of my design was drawing audience attention at the proper moments. Most musical numbers were packed with a large number of soloists scattered across the stage, and so fading the lighting so it worked like a camera angle for the audience was particularly effective. Some very nice looks were created by zooming in on an individual soloist, and covering the choreography around them in a colourful gobo wash or backlight. Equally, matching the lighting to the overall aesthetic of each scene was just as crucial. For “The Blob”, three Andy Warhol paintings were flown upstage, and so I used a colour palette of bold yellows and purples within the scene to create a gaudy 1960s Pop Art vibe – the look of this scene was my particular favourite, and what I considered the most effective part of the show’s lighting. Aside from that, other notable moments included a strong, cool backlight spot on Frank when playing the piano which was consistent throughout the play, creating a look inspired by the dreamlike glamour of La La Land, and “Bobby and Jacky and Jack”, the meta-theatrical performance set in an amateur fringe venue, which was given an aesthetic of equally amateur lighting, with bold, brash colours, snap changes, and two hard edged followspots instructed to be jerky and somewhat incompetent!

'arresting visuals from […] Will Hayman'

All images were taken during the technical rehearsal, and some may not reflect the finished product (hence the ugly, unstretched cyclorama!) 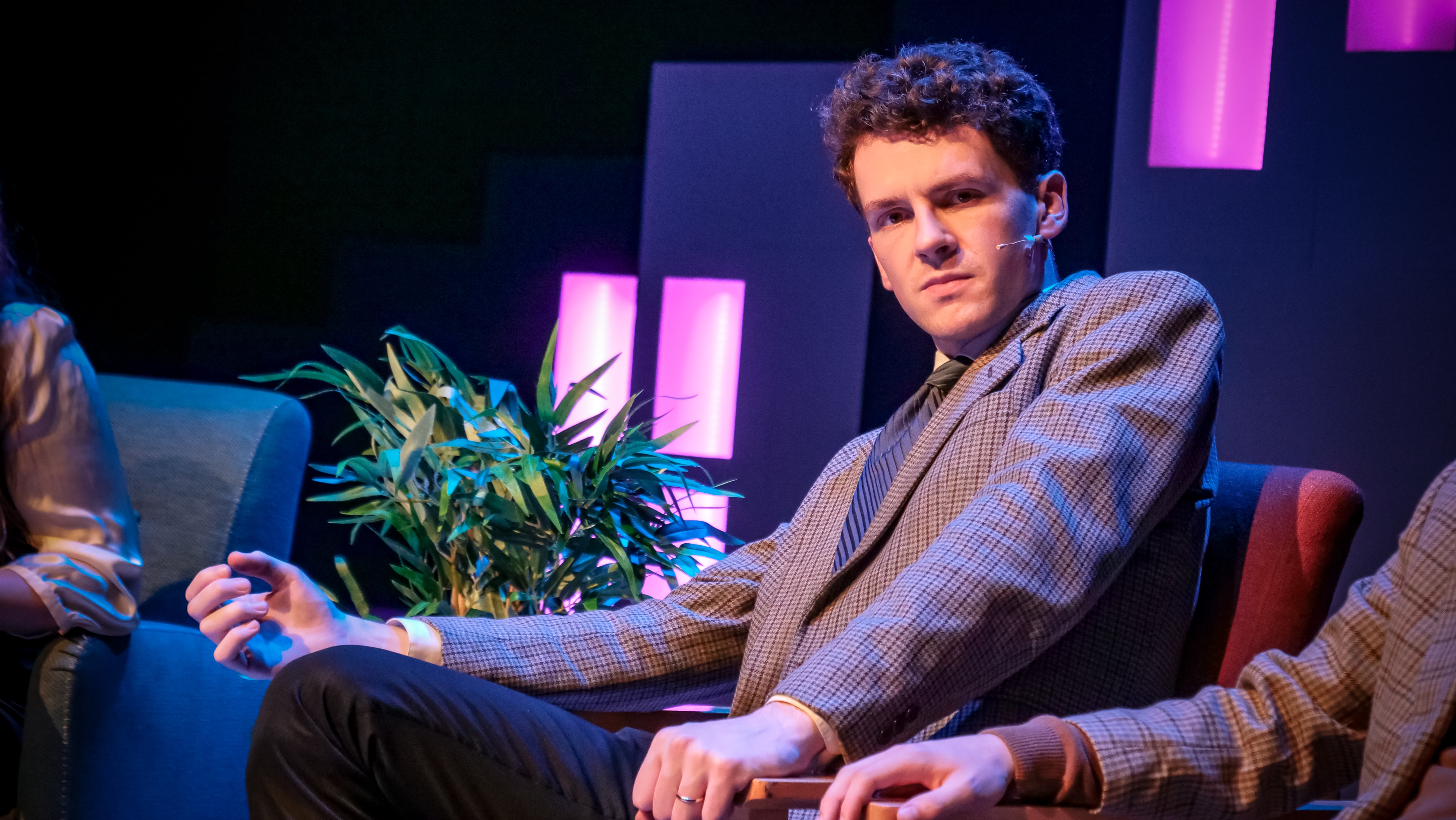