Redacted Arachnid was designed on a principle we referred to as enhanced naturalism. As seems to be a trend in some of the smaller scale shows I design, there was little to no set - only six stools and some hand props - and so all sense of location and setting had to come from lighting. We were keen, therefore, to make sure everything looked real - to pay attention to where the light would be coming from in each location, and make an effort to replicate it. However, the tone of the show was a somewhat amplified reality - the topic was Spiderman: Turn off the Dark, Broadway's greatest flop, and so I wanted to keep the lighting embedded within the theme of comic books - bold, primary colours, snappy changes, and fast motion. The shafts of light made visible by the haze, a bold red and blue colour palette, and two small moving head LED profiles helped establish this vibe perfectly. To create the comic book atmosphere, then, once I'd thought about the features of the lighting in each location, I attempted to enhance and exaggerate them, as you would if you were drawing the scene for a comic book. The result was a set of beautifully aesthetic scenes which established the tone of the play perfectly. A particular favourite of mine, for example, was a scene set backstage in the theatre; I used a single SourceFour Par gelled in LEE071 to create a dim, dark blue wash over the entire stage, and then rigged three very visible birdies in open white at the back of the stage to reflect the birdie lighting of a backstage area. It created the ideal backstage look without compromising on visibility, whilst the birdies in the haze created incredibly striking shafts of light. Similarly, for on-stage moments such as the rehearsal scenes and a TV interview I used three SourceFour Pars in open white rigged with the birdies, creating a very over the top theatrical impression. Other particularly memorable moments included the use of the moving head lights as representative of the flight and swinging of Spiderman. The opening to the show, during which the Spiderman theme would play with the word itself censored out (the fact we were unable to refer to Spiderman for rights reasons was a running joke throughout the play), featured the two moving lights rapidly sweeping over the heads of the audience, one red, one blue, and both in a gobo that looked decently like a spider’s web; a perfect way to establish the tone of the play from the outset. Likewise, a section in which a character describes the movements of the swinging Spiderman (“Spiderman flies over the heads of the audience, landing on the dress circle. He runs, and then dives, landing down by the orchestra pit” and so on) was accompanied by a series of cues in which the moving lights travelled around the room in the exact motions that were being described, visually representing Spiderman’s motions in a somewhat magical and certainly comic book style manner. The most technically intricate moment of the show, and arguably the most impressive, though, is shown in the video below. The scene depicts the moment at which Chris Tierney, a Spiderman stunt double, falls forty feet off stage into the orchestra pit live during a show as his harness system fails. The scene begins in the backstage lighting described above, and a soft spotlight brings the focus onto Chris as he arrives down stage centre. As he pulls the mask down and turns, we snap to the three SourceFours which, as well as creating an eery and striking silhouette, firmly give the impression of an actor stepping out into the intimidating light of a performance. As he runs, we snap to black, and chaos ensues with actors screaming from the wings. The whole stage then strobes in open white, with the moving heads directed towards the audience as blinders. The intention is to make the audience as uncomfortable as possible; to create a sense of shock and painful brightness, as the lighting helps move the tone of the play away from the jovial comical tone to the more severe danger. As the play switches here to a different timeline and a dream like scene which follows, the strobe serves the second purpose of creating a firm divide, and a surreal transition into the next scene, helping to unsettle the up to now linear narrative of the performance. A similar strobe motion, but gentler and in the reverse direction, helps to return the play to its original timeline one scene later. There were no production photographs, and so you’ll have to excuse the rather poor quality of the photographs here taken on my phone. The camera didn’t particularly like the haze, and so I’m afraid you’ll have to use your imagination a little to get a sense of how it really looked, but the photographs are at least a half decent indication.

'The lighting contributes to the sense of spectacle, providing brilliant spotlights and flashing at the hint of an approaching name. They ease the snappiness of the performance, which zips along at a fair old pace and in and out of four-wall breaking aides with ease'

'The lighting was also cleverly designed to make up for the minimal set, moving us regularly back and forth over the 4th wall and into the number of different settings'

Production by Corpus Christi Owlets and Maybe You Like It Productions

Photographs crudely taken on my phone! 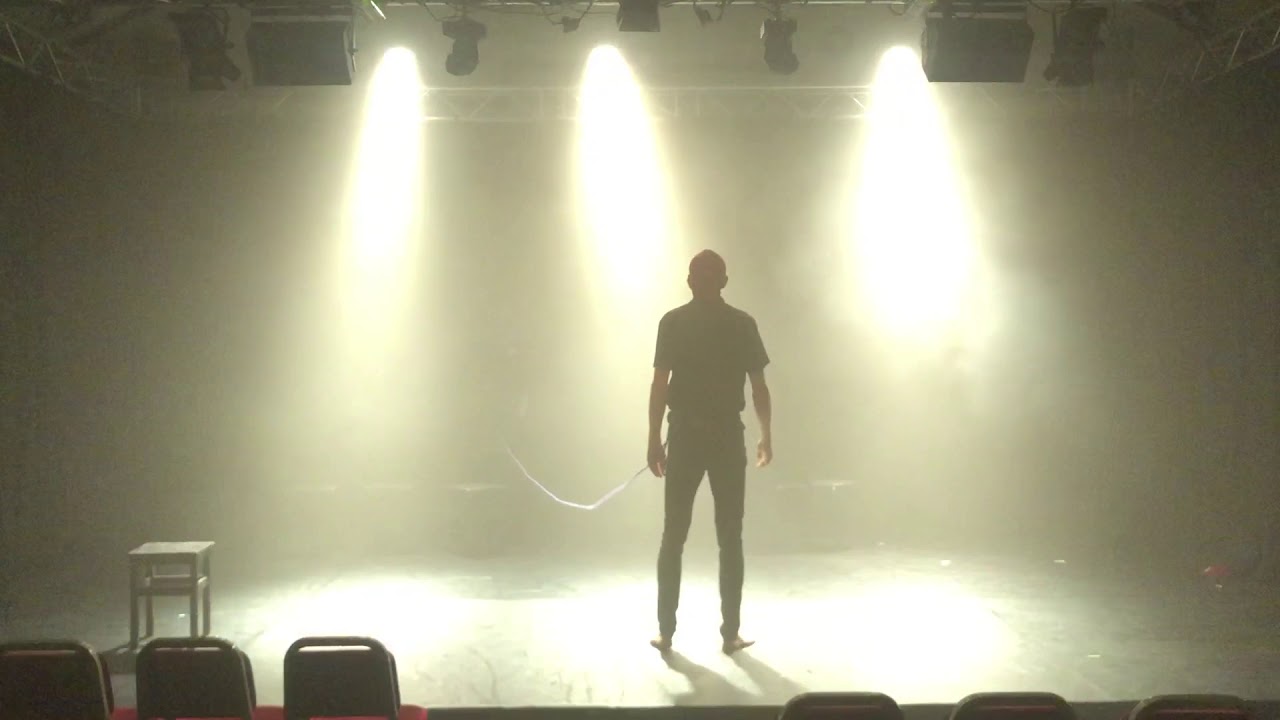