Shadows of Troy was a new adaption of the Greek plays Iphigenia at Aulis and Ajax, although crucially the adaptions were loose, and the second act, based around Ajax, had Agamemnon in Ajax’s role. After having lit 2 energetic and colourful musicals at the Playhouse previously, this deeply sombre straight play was a welcome change and new challenge. The play’s structure consisted of scenes of dialogue in alternation with chorus odes of choreographed movement and dialogue, and both were lit by a separate, yet cohesive approach.

The first act is set over the course of one evening, and so the focus for the dialogue scenes was a gradual transition from evening to night. This was achieved firstly by colour – a gentle warm wash opened the play, gradually progressing into a cold, white palette as the sun set, and eventually to a gentle blue backlight representing the moonlight under which the sacrifice took place. Most effective, though, was the gradual lowering of the angle of light. Two Robe 300 LED washes in the assemblies at about 4m were the workhorse of the show, providing most of the crosslight to illuminate faces, but the rest of the fill went from high frontlight from front of house, to pipe ends, to ETC ColorSource Spots on booms at about 3m, and eventually to shins in L201, which created a fantastically ominous low light for the darkest setting. The moonlight for the sacrifice was created by 2 ColorSource Pars shining through the gaps in the columns of the set – in the haze the effect was astounding. The pillars themselves, lit by cold profiles on the circle rail each with a gobo to add an impression of texture and wear, looked incredibly striking under the light. For the second act, set after the Trojan war, the lighting states for the scenes of dialogue remained largely the same. Again a cold, barren colour palette reflecting the complete destruction and desolation apparent after the war, and light primarily from just above head height on the sides of the stage provided enough visibility in the general cover, but cast enough shadow across the actors’ profiles to heighten the sense of mystery and darkness. Most changes were to heighten or release the tension of scenes in conjunction with sound cues and narrative tone, by focussing in on specific characters whilst darkening the rest of the stage, or dimming the wash entirely in more ominous moments.

Whilst during the odes it was important not to lose the sense of the progression of time, these were lit more abstractly, as the atmosphere surrounding the chorus themselves was one of creepiness and uncanny action. More unnatural colour was used in the backlight, and each ode was given its own basic colour depending on its overall mood – the first travelled through various shades of blue, a latter one containing a fight between two soldiers through various oranges and reds. Apart from the colour, the light on the chorus members was provided primarily by the shins. These cast magnificently creepy, large shadows onto the pillars of the set, provided enough visibility on actors’ faces to see expressions, but enough shadow to maintain a sense of eeriness, and drew the focus to the choreographed movement of the actors brilliantly. Alongside this, gobo washes, and movement of light across the stage from the SolaFrames looked incredible on the rough, soil-like stage floor. The odes too provided opportunity for some great individual moments. The chorus leaning in unison towards an imagined Artemis’ grove downstage left was lit by a single Robe 300, casting incredible shadows and creating a beautiful impression of light emanating from the grove. The narrative description of soldiers sat inside the Trojan horse was lit from behind only by 2 SolaFrames in a wood-slit gobo, at about 5% intensity – just enough light to see the shapes of the bodies, but creating a stunning impression of total darkness which the lines described. As the dialogue describe ‘the darkness erupting into light’, the light of battle burst onto the stage, with the Robe 300s flickering in orange and red, suggesting the light from burning Troy reflecting onto the stage.

There were moments for heightened creativity within the dialogue scenes too. During the final moment of the play, as Clytemnestra stands upstage in the gap in the wall and sees her husband’s dead body, she was backlit by a cold profile on a boom about head height, shining through the gap, and providing a breathtakingly dramatic and shocking silhouette of her presence. The opening of act 2 contained a lit flame torch on stage – the only other light was two fresnels at chest height in each assembly, coloured in L134, and in a flicker effect. This enhanced visibility for the actor’s speech, but gave an incredibly convincing impression that all of the light was being provided by the naked flame. The only other stand out moment was during Agamemnon’s moment of madness in the second act, as he is presented on stage with the carcass of a sheep he has murdered. The director was keen to ensure that the audience felt the same discomfort, pain, and disturbed emotional state as Agamemnon. To create this, we bathed Agamemnon in bold, surreal orange and red backlight, and pointed the Robe 300s in the assemblies directly at the audience, in a bright open white, and flickering harshly. The ulterior motive for this was to reduce the audience’s ability to see what was a somewhat unrealistic sheep prop, but the primary effect was to make the audience grimace and feel distinctly disturbed and uncomfortable whilst watching – it worked perfectly. In the end, I’d consider Shadows of Troy to be up there with my best work, and I was incredibly proud of it. The hardest part was trying to find any warm light anywhere for the curtain call!

'Will Hayman has done an excellent job on the lighting design, casting long shadows across the set that gives it a unique sense of volume.'

'[The success of the chorus] was with the help of excellent choreography, lighting and sound, which were essential to the play’s overall aesthetic and which quietly guided the audience’s attention without becoming intrusive' 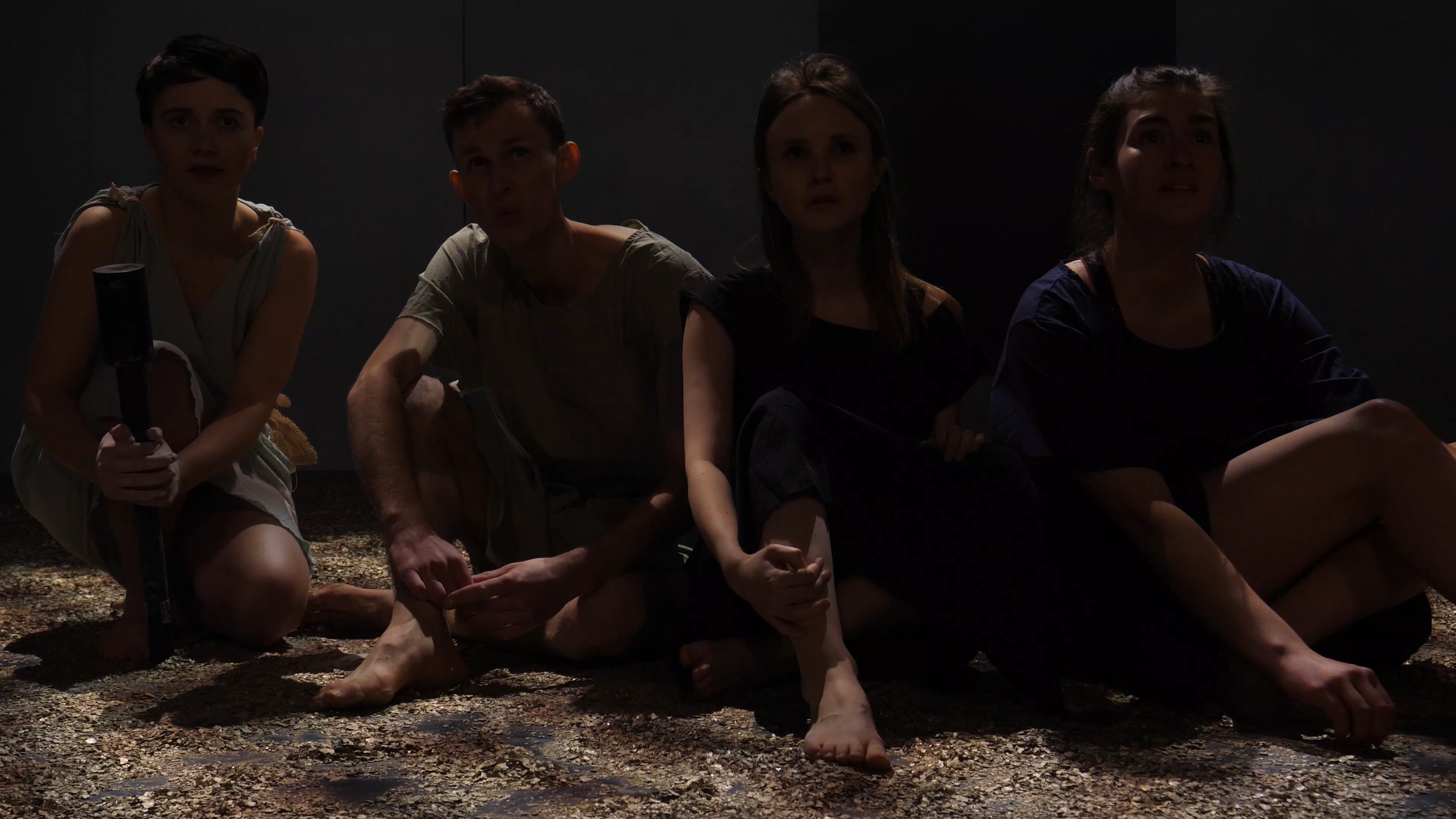